In the corridor on the upper floor of A Casoa, hunting and fishing objects and instruments related are on display. 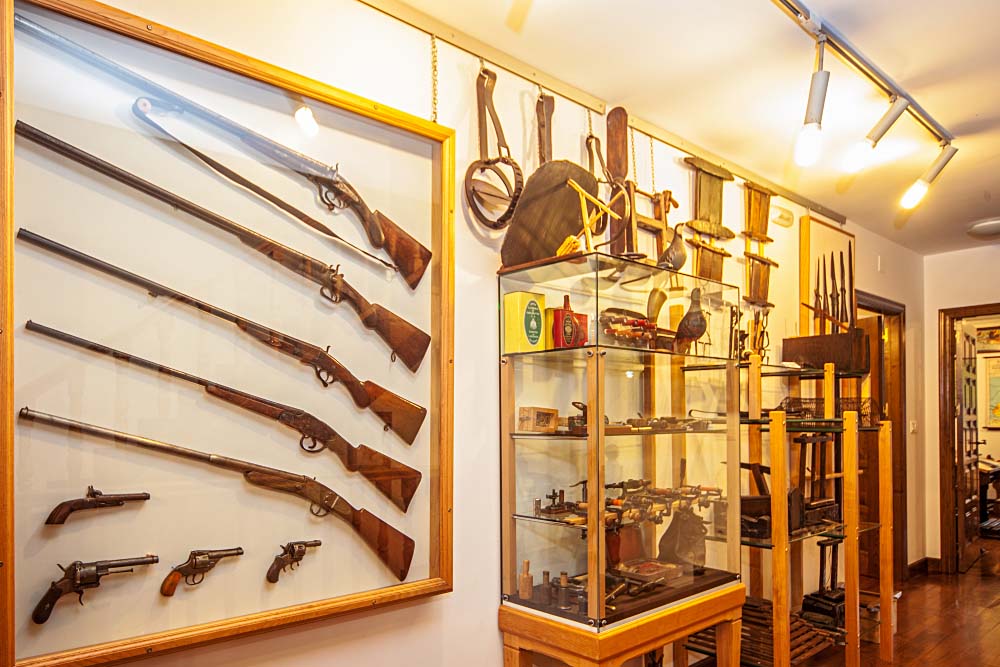 The resources obtained through gathering, hunting and fishing were an important complementary contribution to the peasant diet, especially relevant during periods of famine. Hunting was also practised to control the populations of species such as foxes, wolves, bears and wild boars that harmed the interests of the peasants, killing livestock and destroying crops and beehives.

Hunting was mainly passive, aimed at capturing prey by setting traps in the places they used to pass through. This was the purpose of the trapelas for partridges, of the different types of garduñeiras (traps) or of the snares. There were also specific traps for mice, rateiras (rat traps), which were placed in houses and mills.

The captures were also tackled with larger traps, some of them with an important constructive entity, such as the couso and the pesugo. The couso is a wolf trap consisting, in its most common form, of a large pit enclosed by a wide masonry wall between two and three metres high, topped with slabs arranged to form an internal overhang.  Inside the enclosure, a prey was placed to attract the animal, which, once inside, could not escape.  The pesugos were used only for hunting bears and consisted, as described by Pascual Madoz in his Geographical-Historical Dictionary (1845-1850) when referring to one located in Armenande (Ayande) “on a long beam supported by a beehive and covered with thick branches, which forms a kind of hut with only one entrance, and through which the bear discovers the hive: he eagerly enters to take possession of it, and as soon as he embraces it and makes the natural effort to separate it from its place, the beam and hut collapse, leaving the bear at the mercy of the hunter”.

Hunting weapons include chuzos (spears) and a remarkable variety of firearms, accompanied by gunpowder horns, cartridge-loading machines and moulds for making shells and bullets from the 19th and 20th centuries.

To defend their crops from vermin, peasants had a variety of instruments to deter the animals from their crops by making noise to keep them away. Among them are the martavelas, a wind-powered contraption that was placed in the fields to scare away birds, and the mazones or mazapilas, powered by water, which were used in the corn fields and in the beehives to scare away wild boars and bears.

Fishing for eels, trout and salmon was an important activity that was practised above all in the villages located on the banks of the river Navia or big river and which largely ceased when the construction of the Doiras and Salime reservoirs made it infeasible for salmon and eels to come up from the sea. Catches were made either by hand or by using nets and traps or specific tools such as fisgas (three-toothed harpoons) and rods.