In Grandas de Salime, there were two barber shops that did not stay open after their owners retired.

During the construction of the Salto de Salime between 1948 and 1953, there were five tailors in Grandas de Salime, and three more in Boal and Fonsagrada, who made clothes for the hundreds of workers on the site.

Grocer's shop and back shop

Mixed shop similar to those that could be seen in towns and villages until recently offering all kinds of products to their clients.

This room exhibits the transformation processes of linen and wool, basic textile raw materials in the region.

The Ethnographic Museum of Grandas de Salime “Pepe el Ferreiro” is a public museum of a regional nature, the mission of which is to gather, guard, conserve, increase, research, communicate and disseminate the material and immaterial ethnographic heritage of the communities of western Asturias.

The Museum was founded in 1984 based on the ethnographic collection gathered by J. Mª Naveiras Escanlar, “Pepe el Ferreiro“, who was its promoter and director until 2010. Initially installed on the ground floor of the Town Hall of Grandas de Salime, the Museum was relocated to its current location in 1989, occupying the old Rectory House of the town, which was renovated for the occasion. Since then, the Museum has continued to grow and today, its facilities occupy a surface area of more than 3,000 m2. The exhibition areas are distributed in three main buildings that exemplify the traditional architecture of the region: Rectory House, Miller’s House and A Casoa. The open transit spaces are dotted with smaller architectural structures and furnishings with a specific purpose, which are also part of the exhibition, including the mill, the granary, the bakery, the cabazo and the chapel.

The central hub of the collection is made up of the initial list compiled by José María Naveiras Escanlar. It has subsequently undergone a constant increase through acquisition but, above all, through donations and deposits from private individuals. The material repertoire focuses on the traditional rural peasant way of life and the trades carried out in this setting, with its geographical scope referring to the councils of western Asturias, but also incorporating samples from other areas of Asturias, from various regions of the Iberian Peninsula and from different European regions. 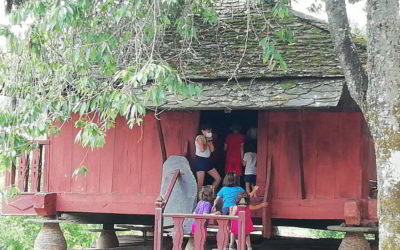 Recommendations to minimize risks of covid-19 virus infection when visiting the museum   The...