The kitchen was the nerve centre of peasant life and often the only room in the homes of the poorest families. It was where most of the domestic activities took place and the meeting point for the members of the family unit and their relatives, even serving as a bedroom. Its dual function as a place of work and for socialising was particularly important during the winter, when the long, cold nights were conducive to work and gatherings around the only source of light and warmth in the house.

The kitchen of the Ethnographic Museum of Grandas de Salime “Pepe el Ferreiro” maintains its original location. It is accessed through the entrance hall which, next to the front door of the house, consists of a wide corridor that acts as a passage way to the other rooms on the ground floor and the attic. A taboao (partition) of chestnut boards encloses this space, differentiating it from the rest of the kitchen. 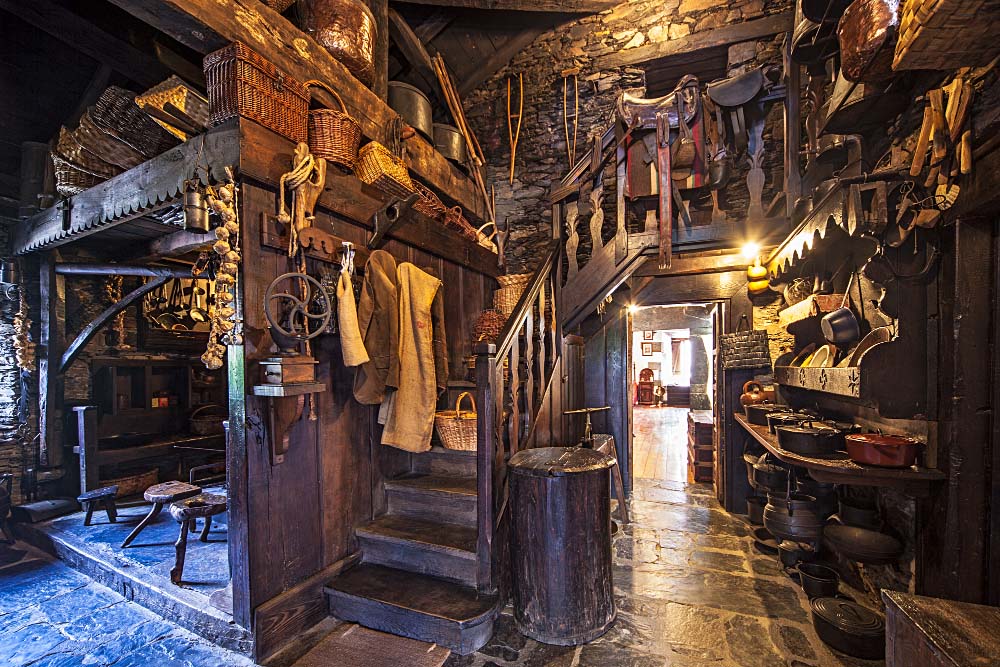 In the entrance hall you can see a remarkable collection of objects and instruments for daily life and domestic work. From the taboao (partition), on which a coffee grinder can be seen, hang mantelos de pigureiro (shepherd’s cloaks) and above it is a display of baskets with various functions. In a prominent place is the artesa, a singularly important piece in a kitchen, where bread was kneaded and the loaf and meat for daily consumption were kept. A conqueiro (basin) and a trabeira (shelf) house the crockery and kitchen utensils. In the vestibule you can also see various types of canadas o ferradas for carrying water, baskets, cauldrons and some ferramentas da terra (farming implements), including axadas for digging the hills or gaviochos, petas and rodos for working the fields.

Hanging on the wall and on the beam that crosses the vestibule are exhibited leather and wire sieves and caldeiras (cauldrons) of copper and wrought iron. The latter were made in the Santalla d’Ozcos mill and were used to melt the roxóis or pork fat.

After passing through the entrance hall, you enter the strict area of the lareira, which occupies a quadrangular space located at a slightly higher level than the rest of the kitchen areas, all of which are tiled. In the centre, slightly raised above the surrounding floor and enclosed by vertical slate slabs, is lar or low wood fire where the food was cooked and where the family warmed up. The risk of fire is minimised by increasing the distance to the roof. Above the hearth, a framework of reeds or sticks, known as caínzo, was placed, from which sausages, salted meat, chestnuts or any other product that needed to be cured by smoke were hung. The Rectory House had a chimney made of interwoven planks and sticks covered with lime and mud, a privilege of wealthy houses like this one, which was not available to peasant dwellings, where the smoke was evacuated through the cracks in the windows and roof. 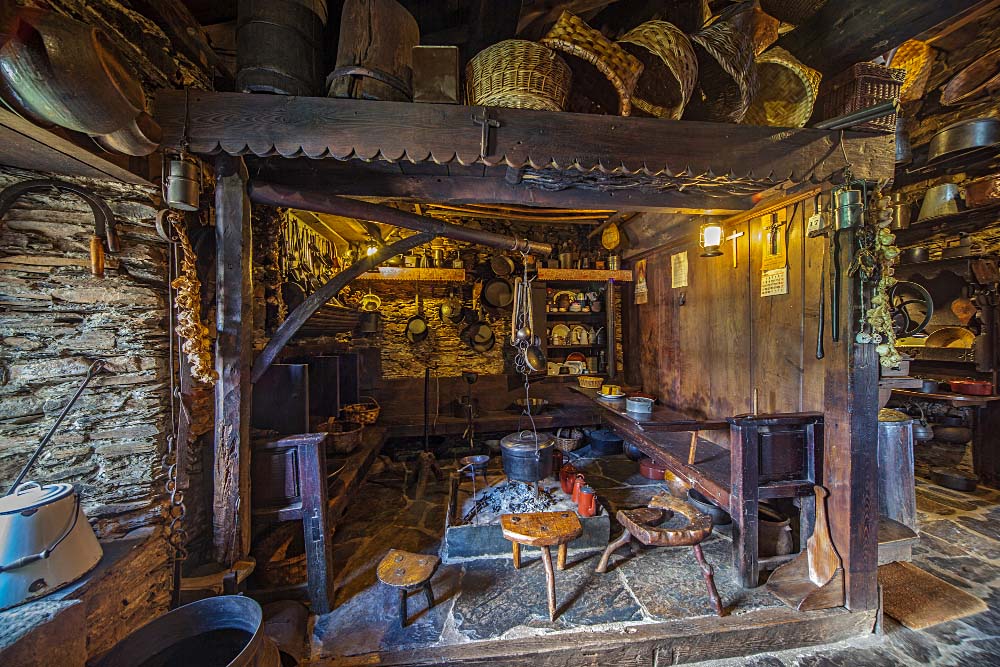 In one corner stands the guindaste, a wooden structure made up of a right foot and a rotating arm from the end of which hangs the garmalleira, an adjustable chain from which the three-foot cast-iron pots or the iron or copper cauldrons in which the food was prepared are hung. This mechanism allowed the containers to be moved closer or further away from the fire, as required. In order to avoid direct exposure of the flat-bottomed containers to the fire, estrepias (trivets) were used.

Around the central hearth, occupying three of its sides, there is a chestnut wood bench on which a folding table is anchored that is lowered for eating and folded away when space is needed for other tasks. Several tallolos (benches) are distributed in the passage area, extending the seating areas for large family groups. Built into the wall, around the bench, several closed cupboards are used to store food and house crockery and utensils. Everyday kitchen utensils such as tixelas (pans), cast iron and copper chocolate pots, mortars, garfelos (iron ladles), strainers, coffee grinders, saucepans, etc. are distributed around the room, concentrating on the conqueiro (corner shelf) and the trabeiras (shelves). Next to them, you can also see drums for roasting chestnuts, clothes irons and lighting elements such as carbides, oil lamps and candle holders. 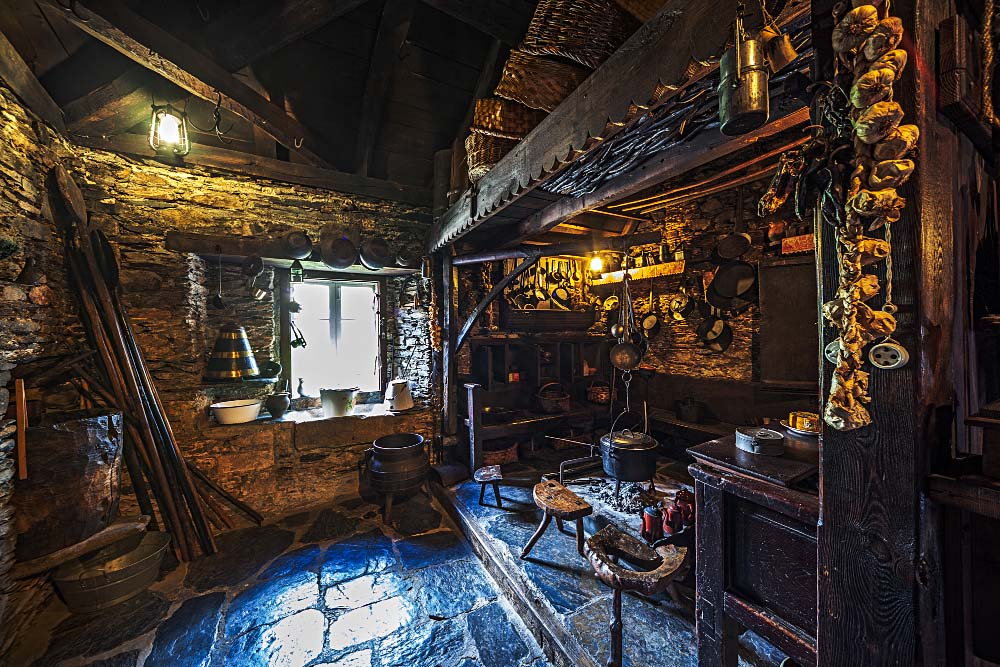 Opposite the lareira is the forno (oven) where the family’s staple food, bread, was baked. Made of bricks or tiles, clay, slate and sandstone, the oven has a semicircular perimeter that stands out on the outside of the house. Its front has a porta (door) through which the bread is stoked and introduced. It is covered with a slate visor that prevents sparks from flying onto the wooden roof and causing a fire. Under the door is the sinceiro (ashtray), in which embers and ashes are placed.  The pairas (shovels), the rodalo, the baxase (branch broom) and the forqueta (fork) are always placed next to the forno (oven). To bake the bread, the oven is fired with wood until the walls are “white” (glowing). The bread is then cleaned and baked. In each batch, about nine fogazas (loaves) and a bolo (bun) of bacon or chorizo were baked. Bread making was an exclusively female job. It was kneaded every fortnight and almost always on the eve of a festivity or a task requiring the participation of the neighbours, who were offered a plentiful meal. Before putting the bread in the forno, a cross was made and prayers were said for it to turn out well: “A San Pantaleón, que lo saque lo saque bon, a San Justo, que de pouco lo volva muito, y a San Vicente, que lo acreciente, y a San Bartolo, que saque von bolo, y a San Froilán, que saque bon pan” (Ouría, council of Ibias).

Under the window, benefiting from natural light, is the fregadeiro (sink), consisting of a monolithic basin embedded in the wall. The flaring of the opening allows for the creation of a small plateau on which the sellas or ferradas are placed with which the water was brought to the house from the fountain, a task carried out by the women.

The trobo de colar is placed between the oven and the window. This device was used to wash the linen, a job that was also carried out by the women of the family. It consists of a hollow trunk, trobo, usually made of chestnut, which is placed on a round stone, dala, partially embedded in the facing and fitted with a spillway spout that acts as a spillway. The wet clothes are placed in the trobo and covered with a coarse, dense cloth filled with wood ash, over which cauldrons of hot water were poured in a sequence of “three templadías, three calentías and three fervidías”, so that the water in contact with the ash is transformed into a bleach that whitens and disinfects the clothes.