The granary is a basic and indispensable piece in the rural economy of Asturias. It consists, in simplified form, of a barn made up of a quadrangular wooden box with a hipped roof which, raised off the ground on characteristic suspension elements, enables the products of the harvests to be stored, protecting them from rodents and humidity.

Normally found to the north of the peninsula, several variants of the traditional granary developed from this simple structure, the diversity of which lies in their morphology, in the construction materials used and in the finishes and decorative elements. 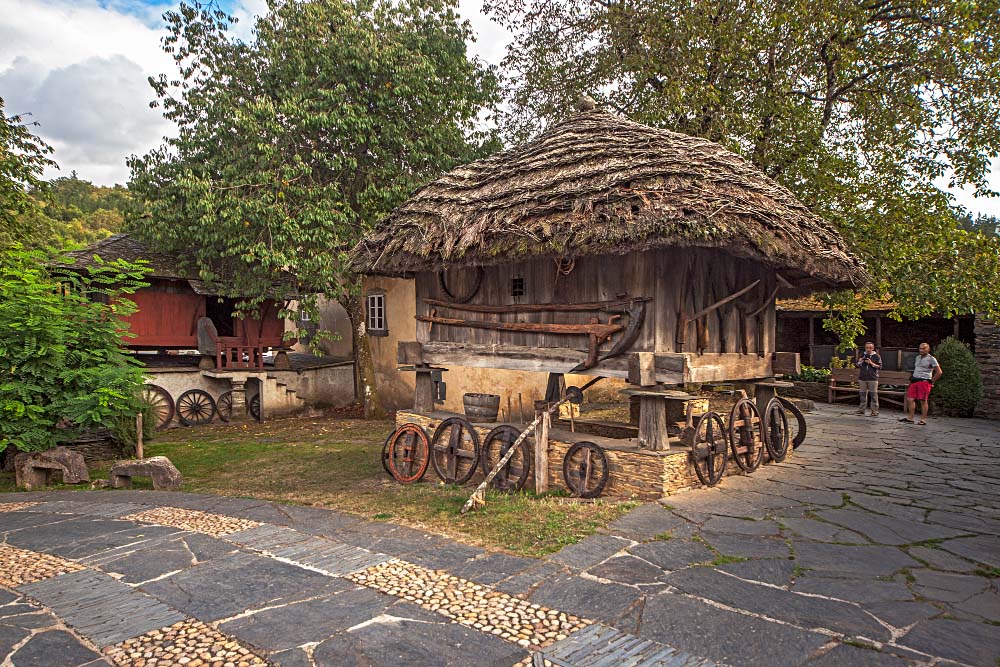 The Ethnographic Museum of Grandas de Salime “Pepe el Ferreiro” has a granary that was built in 1991 by reusing pieces from a ruined bakery from Casa Gómez, in Berducedo (Ayande). Three of the colondras (slabs) on the opening side of the entrance are decorated and bear a inscription:
– Crowned tetrasquel and under it the inscription “FVEÉCHAPORD. / MANVEL GOMEZ / AÑO DE 1874”.
– Clock dial and fleur-de-lis. Underneath the inscription “EL / MAESTRO CAM / POS.”
– The inscription “REFÉXOLO / PA HORRO”, ribbon and inscription “MANVEL MONTESERIN /AÑO D 1991”.

The original bakery was the work of the master builder Campos, from the council of Ayande, of whom at least four works are known, dated between 1859 and 1874. The custom of signing granaries and bakeries and decorating them with geometric motifs began at the end of the 18th century, coinciding with the expansion of these constructions in the south-west of Asturias, and lasted throughout the 19th century. Carved decorations are one of the richest manifestations of folk art in the area.

In 1991, the carpenter from Grandas de Salime, Manuel Monteserín, was responsible for its current appearance. The granary we see today is small (3.50 x 4 m), raised directly above the ground and stands on four feet (pegollos) of oak wood. The roof is made of rye straw and is fastened with heather twigs. This roofing technique, known as a baguna or a veo roofing, is the traditional one in the region, highly valued by the farmers for its insulating qualities. To maintain its functionality, the teito should be renewed periodically, every 4 to 5 years, keeping the old veos that are in good condition and can facilitate the attachment of the new straw. This type of roof has practically disappeared today, and the roof of the granary of the Ethnographic Museum of Grandas de Salime “Pepe el Ferreiro” is one of the few examples that can be seen in Asturias.